Mick Jenkinson is a poet, songwriter, performing musician and events organiser in Doncaster, South Yorkshire. He was the director of Doncaster Folk Festival for five years, and is an associate member of Right Up Our Street, a nationally-funded project which aims to increase arts engagement in the Doncaster region.

He runs Well Spoken! – a monthly open mic night held at Doncaster Brewery, and his first pamphlet, A Tale to Tell, was published by Glasshead Press in early 2018.

Mick Jenkinson is also involved in a song-writing collaboration with the poet Ian Parks. Their CD Songs of our Town was released in 2017. 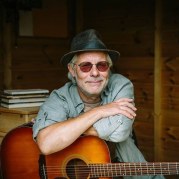 Mick Jenkinson brings his finely-tuned musician’s ear to the poems in this collection. Whether drawing the reader into his prescient, enigmatic narratives or capturing the fleeting moment in his intensely personal lyric poems, Jenkinson is consistently accessible, engaging, and precise. Collections like this don’t come along very often and when they do they deserve to be read and re-read in order to unlock their secret. When the Waters Rise is an excellent collection in its own right and one which affords a glimpse of what we might expect from this fine poet in the future.

Mick Jenkinson’s poems are full of love and regret, little elegies for people, places and relationships; to use his phrase, the slow unfolding of what we are, an examination of the individual and his place in history and his environment. The first poem, a moving villanelle is just one example of Jenkinson’s deft and musical use of form and rhyme which gives these poems a timeless quality. The lovely melancholy ballad, Beyond the Salutation, demonstrates beautifully how the poet’s song-writing skills inform his poems, a unique voice within a form as old as time.

After such a year
how much further
can the world fall
before it begins
to heal?

Amid the sadness
where’s the incantation
to be found
to awaken what’s been
asleep too long?

Among dead ashes
what will it take
to blow all those
sparks of hope
into a flame?

Leaves are falling
and it’s always an end
or a beginning
of something.