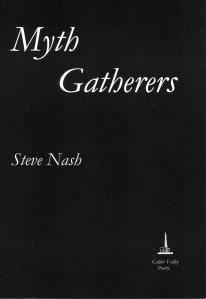 Steve Nash is a writer, performer and musician, born in Yorkshire and raised on army barracks across the UK and Europe.

A widely and internationally published poet, in 2014 Steve won the Saboteur Award for  ‘Best Spoken Word Performer’  from a shortlist that included  Kate Tempest and Hollie McNish.

Steve was awarded a Ph.D  in literature studies  from Leeds University.  He currently works as a Lecturer at Leeds Beckett University, and as an Associate Lecturer at the University of Derby.

You can find out more about Steve at www.stevenashwrites.com

Steve Nash’s poems are addresses, interventions, quest ions, complaints, agreements, ruminations, conclusions…  concerning stories that have been long forgotten, or not yet invented. The ease and audacity with which he speaks in figures lets him take hold of all the scattered materials that present themselves and re-write them into a larger scale of experience.
‘With a single laugh like a thunderclap
you shape your mouth to a hollow, howl your new name,
and a crow flies out, skittering into the wind.’
– Peter Riley

Steve Nash’s poems are desire paths, inviting us to find our own way through the rich, surreal, tender landscape he invokes, a world where silences are coloured in pencil, valleys brim with ‘intoxicating uncertainty’ and darkness is a benediction. From a Dear John letter to Leeds ring road to lyrical incantations and hymns to ghost stations, these poems enchant and enthral.
– Helen Mort

Unpick your native words.
Let them fall over the moor.
Angle a square of vellum
against the landscape
and trace your language.

Pick up your plot and go
out into the valley.
Walk your path,
keeping close to the
tumble of your words.

Listen for the shadowpulse
of animal, wildflower,
happenstance.
Gather their metaphors
and alien rhymes.

Take not a map but a metre
and let the drummer’s
arms ride loose.
Walk without knowing. Leave
your old words to seed.